Outrageous. The Olympic Committee just said they don’t think Russia is violating the Olympic Charter – even though Russians are facing anti-gay arrests, violent attacks, and exclusion.

Olympic host nations are supposed to obey seven principles and Principle 6 says discrimination of any kind is not allowed. But, the Olympic Committee is now acting like lesbian, gay, bi and trans people just don’t count.

The International Olympic Committee (IOC) has made their stance on this crystal clear: They see no real problem with what’s going on in Russia. It’s an “internal affair” and the IOC will not call it what it is: state sanctioned discrimination, persecution and violence directed at the LGBT community.

If, like me, you are outraged by this cowardice on the part of the IOC, there are things you can do. You can send a message to Olympics President, Thomas Bach. You can sign petitions at Change.org. And all of this does actually matter!

Personally, though, I believe that we need to hurt the bottom line of the main Olympic sponsors. Therefore, I propose a boycott. But it doesn’t have to be all or nothing! If enough of us just buy one less meal at McDonald’s, or choose a drink other than those manufactured and sold by the Coca Cola Company, this week, they will feel it! 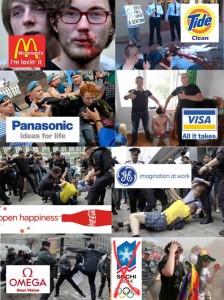 Some of the Olympic sponsors…

I’m not asking anyone to go hungry or thirsty if there are no other alternatives. I’m just asking you to consider the alternatives when available. I eat a lot of fast food and drink a lot of carbonated soft drinks, and I confess it would probably be close to impossible for me to change this quick enough to make a difference. But going without McD’s and Coke? Easy! In most cases, there are plenty of alternatives.

You don’t have to abstain 100%. Just choose alternatives when you can. And if you really want to make a change, tell the companies that you are boycotting them, and why! If enough of us put pressure on them by doing this, I believe they will put the necessary pressure on the IOC in their turn.

I’m tired of whining. I need to start doing something. And this? This is easy! But it still has the potential to actually affect a change and it’s worth doing!

Join the boycott on Facebook (https://www.facebook.com/events/529227667155460/). Spread the word. Drink something else this week, buy a computer from a different manufacturer, do something.

Please, we need to do something….